Reflections of My Father

A Rift in the Illusion

Few of us ever escape the chains of our reality and see beyond the forms before us.

We mire in our knowledge and all the things we gather to us, forming a shell that hardens with time.

For me I have seen past it only a few times and always in the strangest of ways.

He came to me so subtly and he was hardened by a life of struggle and hardship that was so developed that his own mind no longer doubted the truth of anything he said.

His was a life of total fantasy and yet it was through this hardness and fantasy that I would see far beyond this earthly view. He was the catalyst for a rift that broke through all my illusions and perhaps, his own.

I think he knew it himself but any expression of it had to pass through the shell of his imagination of which little if anything was believable. It would be his secret, but not without first finding a way to peer out into horizons which are rarely known but always there.

We all walk alone through this life even though we are surrounded by others on every side. They, too, harbor the depths of loneliness and fear we all feel but neatly tuck away inside us.

We wear our masks and wrap ourselves tightly in the things that best cover us from exposure to a brighter light. It is the nature of humans. Beasts of the field who walk stoically into life afraid to show how truly scared and alone they are.

We are taught to survive no matter the cost. Spare no one or thing in preserving that which you are. The strong survive and the cost to the weak is of no consequence.

This we must do and yet in some there arises the awesome awareness that it is not just the “man” that is important, but that life, all of life, is.

For some, the rift allows just enough light to shine through that we sense something greater than mere survival. We turn to the light and see that we can survive without the “need” to survive.

We no longer need to run to or from life gathering as we go.

All we need is to walk with it and life itself becomes the giver. 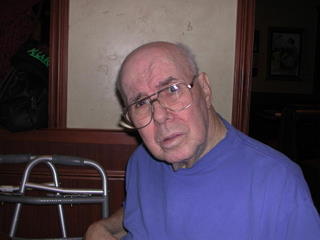 I saw this rift in a hospital room with a man, my father, whose hardened life would take pause and see something far beyond the things and forms of normal life.

Most of my time with him was spent listening to his illusion of the events of his life. Even in my own illusion his life, his illusion, was incomprehensible.

He was an enigma of the highest order. Some might say crazy. Yet he could not be more certain or proud of the life he lived. I envied him. It was, like most of us, the unexamined life. Safe, but edgy. Dramatic but fun. Full in every way, even if it was imaginary.

I resigned myself to never knowing the part of his history that began when I last saw him as a boy and ended when I met him a year ago. A history that would span over fifty years, now buried in the recesses of an imagined life. That part of him is and always will be a mystery. A parenthesis in time with no explanation.

I didn’t know just how short his time would be in that hospital room. Nothing indicated he was about to go.

But I should have known, I guess, because he did a most unusual thing. He lifted his left hand upon which he wore a ring. In the short time that I knew him, I had never seen him without it. He wore it on his ring finger even though he had been divorced and single most of his life.

He removed the ring from his finger and handed it to me with the admonition to “make sure you give this to the boy.”

I asked “Which boy are you talking about?”

He replied earnestly, “You know the boy… Oh, what’s his name…? Oh Carl.”

My father many times would speak directly to me about me which was one of many things about him I found so charming and fun. I often would remind myself that his memories of me must have been of that 7 year old boy he left just as my memories of him were of a younger, more vibrant, beautiful man.

We both retained our earlier images of each other and in one sense, he was talking to that little boy by way of the man he had become.

These were always sweet exchanges.

He responded “You know…. Carl.”

He added, “Make sure the boy wears that ring, it’s magic. It will protect him and he will never want of anything. Just make sure he gets it.”

He again reiterated the ring was special and would protect the boy.

I should’ve known he was telling me good-bye and passing along to me something he cherished and wanted his boy to have. It was a tender moment. It was also a profound telling of what was to come that I should have recognized but missed completely.

It was also in this moment that I saw him as he was before his shell had formed. Sweet, kind, gentle. That is what showed through that rift.

Then almost inexplicably, he spoke softly and solemnly. “I’m so sorry for what I did to you kids.” He shook his head and looked as if he would cry. “I’m so, so sorry,” he said again.

I looked at him and he at me and that’s when he cracked wide open. The light shined through and the mask of his life fell away.

I saw him not as man but as God.

There were others there with him but his light reached out and grabbed me, filled me, and then lifted me – and then it was gone as suddenly as it had appeared.

He looked at me and smiled as if he knew just how much he had opened up. Through his smile and with a glint in his eye, he winked and said simply, “That’s enough.” I wanted to shake him but I knew the rift had closed.

That was the last time I saw him alive. He passed quietly, shell and all.

I returned to the hospital after the call came in and as I sat beside his lifeless but still warm body, I filled again, only this time with a rush of emotion and sadness.

He had left again as he had before. It was sudden, unexpected, and without explanation. This time, however, I saw into him in a way I could not as a boy.

As I sat there holding him in that quiet room I saw him flying, as it were, on the wings of eagles soaring free, at last, from the darkness of his mind.

He was at peace and wore the expression on his lifeless face. Looking back just a few hours earlier, his smile said it all and I know, even now, he is not gone.

He, in fact, surrounds me in every way, only now it is pure light without the dreams and fantasy. It is a brilliant light indeed.

Life is sometimes perceived as desolation. A hard journey through a maze of missteps, broken dreams, struggle and sadness.

It is like a maze through which we struggle to get through. In time we become the maze and it becomes us, but all the while we move on.

We choose life in spite of the troubles along the way. That is life’s relentless pull on all of us.

We are life’s creators. We uphold it as we have learned to perceive it. It never is as we think it is even if we see its awesomeness.

Life is always more grand and wonderful then the physical eyes through which we view it.

It took knowing him before I knew this.

I had waited as a boy first, then an adolescent, and then as an adult, for my father to appear.

But when he did, it was unlike anything I imagined it would be. I created my own illusion of what this visitor must be when he did appear and the weight of it pressed down on me inexorably. My illusion of him was a grand one.

When he did appear, he was simple, broken, and feeble but he carried an unseen power that put into question everything I thought I knew and most certainly everything I had imagined.

He was indeed grand but in his way, not mine. The small was made great, the weak strong. He was unafraid of the immensity of the universe and in showing me, I too became unafraid.

My father stepped across a great abyss and in the grandeur of those last few moments, he simply turned his head toward me and smiled.

The rift between what he was and what he became had been breached.

With a smile and a wink, I looked into eternity and saw again the worth of souls.

Together, for just that moment, we looked out into infinity and his light became one with my own.

I am not the same.

Return to Heaven and Hell from Reflections of My Father